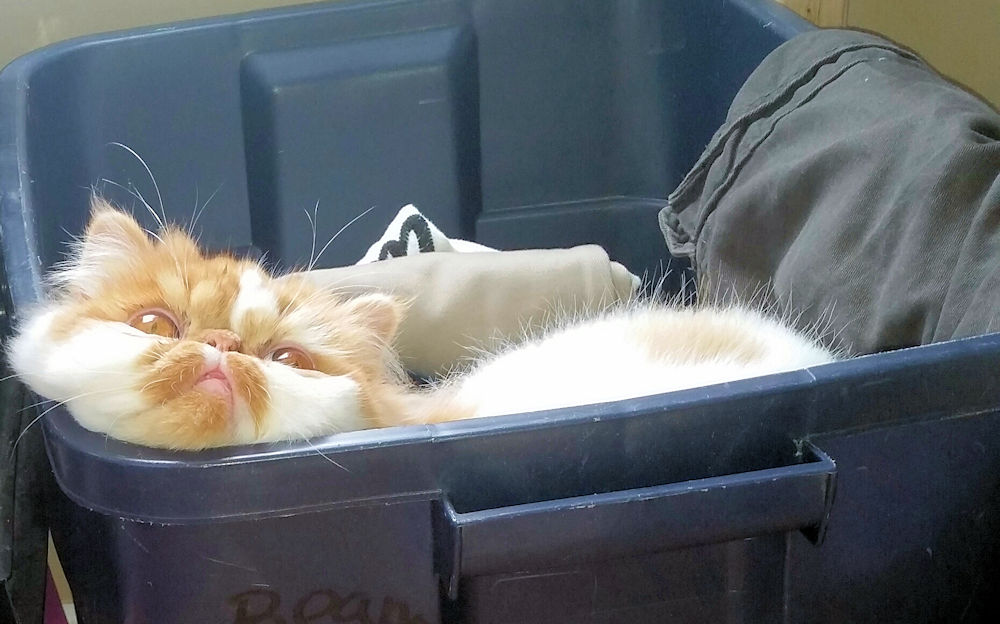 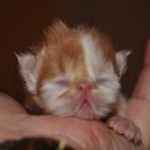 On May 14, 2015, our Persian cat, Sophia Loren, had her kittens via an emergency C-section. We ended up with four live kittens. There were two red and white males, and we decided to keep the one with more white on him. The other Red Tabby and White kitten went to a show home. Every time you picked Ralph up, or he did not like something, or he liked something, or just for any reason whatsoever, he would "talk" boisterously to you. I started calling him Ralph Mouth and the name stuck. 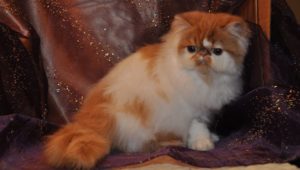 On Friday, October 23, 2015, we found Ralph in our hallway flopping around like a fish. It was horrible. We realized his hind end seemed paralyzed. We immediately went to our veterinarian's office and thankfully, Dr. Peggy Williams of Refugee Canyon Veterinary Services was on call. Dr. Williams has a lengthy background in feline veterinary medicine, and if anyone knew what was going on with Ralph, it would be her. Dr. Williams suspected that Ralph had suffered from a Fibrocartilaginous Emboli (FCE), but did not have the diagnostic tools to confirm this diagnosis. We were referred to MedVet Columbus where Ralph underwent a battery of tests and procedures including blood work, X-ray, ultrasound, MRI, and a spinal tap. The tests revealed an abnormality in Ralph's spine. 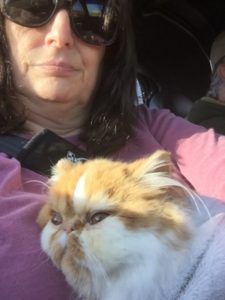 Ralph on the way to the vet.

The MRI indicated a degenerative change in the discs at T13 and L1. Fragments of the disc material caused an FCE, which is similar to a stroke but with connective tissue instead of a blood clot as the cause. When debris from the spine lodged between those discs, it caused swelling in the spinal cord, hence paralysis. The prognosis for recovery was not very encouraging.

When Ralph first came home, he could not walk. We put him in an enclosure next to our bed, gave him a cookie sheet for a litter pan so that he could drag himself to the pan. Every day, we would clean Ralph up as he was not aware of when he was going the bathroom. We spent the majority of our time with Ralph. Throughout the daytime, we would do passive exercises on Ralph's back legs so he would not lose more muscle tone and hopefully regain enough muscle tone to walk again.

Over the next few months, Ralph slowly improved, and with each check up with Dr. Williams; she was surprised at how far he had progressed. Dr. Williams had not expected the type of recovery from the FCE that Ralph was showing.

Throughout this process, our friends, former kitten buyers, and several complete strangers donated money towards Ralph's mounting veterinary bills. We were overwhelmed by the outpouring of love, support, and prayers we received during this time. We had not expected it and were humbled by it.

After a time, Ralph had improved so much that he was chasing and playing with the other cats, climbing the cat trees, jumping onto things and had regained the use of his rear end except for a little "hitch in his get along" (his right rear foot). Sometimes, if he gets unbalanced he falls over, but quickly regains his legs and off he goes. Ralph has made a tremendous recovery which he would have probably not been able to do without all of you.

At one point Ralph started showing excessive interest in the opposite sex, but he was still in his recovery process, and we wanted him to concentrate on getting better with his mobility rather than trying to breed the girls. We made the decision to have him neutered. This decision was a difficult one as he and the other Red Tabby and White sibling were the only intact males from our stud cat, ESPY that we had already neutered and retired from our breeding program. However, the decision to neuter Ralph was in HIS best interest and not necessarily ours.

Ralph still likes to chase the girls and loves to play with and groom the kittens. He refuses to let me go to the bathroom alone. If I close the bathroom door, he pounds on the door and cries at me indignantly until I give in and open the door to let him in whereby he lays down on the floor next to my feet. He can jump up on our bed and keeps me company when I am having a migraine. At night, he sleeps with me and doesn't just lie next to me, but has to drape himself over my legs. While Ralph is completely capable of jumping up on our bed and does it several times a day, at night when John and I go to bed, Ralph comes over to my side of the bed and sits on the floor and chortles at me until I pick him up and put him on the bed. Ralph has been a blessing to us and a constant goofball.

A kitten client asked if we were willing to place Ralph with them. The request surprised me as I had never entertained the idea of re-homing Ralph. I stuttered a bit when asked the question but then replied that I guess it would depend on the home. I thought about their request, the type of home they have, their ability to care for him, and their other cats. Ralph would receive a lot of attention in her home, and if he can make the adjustment to a new home, I guess so can I.

While my husband and I were giving Ralph his bath for him to go to his new home today, I started sobbing because I am going to miss Ralph a great deal. The decision to let Ralph go may be in his best interest, but it comes at an emotional cost to me. However, as a breeder, I have to make decisions not based on what is always best for me as a breeder and pet owner, but what is best for each and every baby I bring into this world. Go with God Ralph and have a great life with your new family. I will miss you forever as the goofy cat you are.