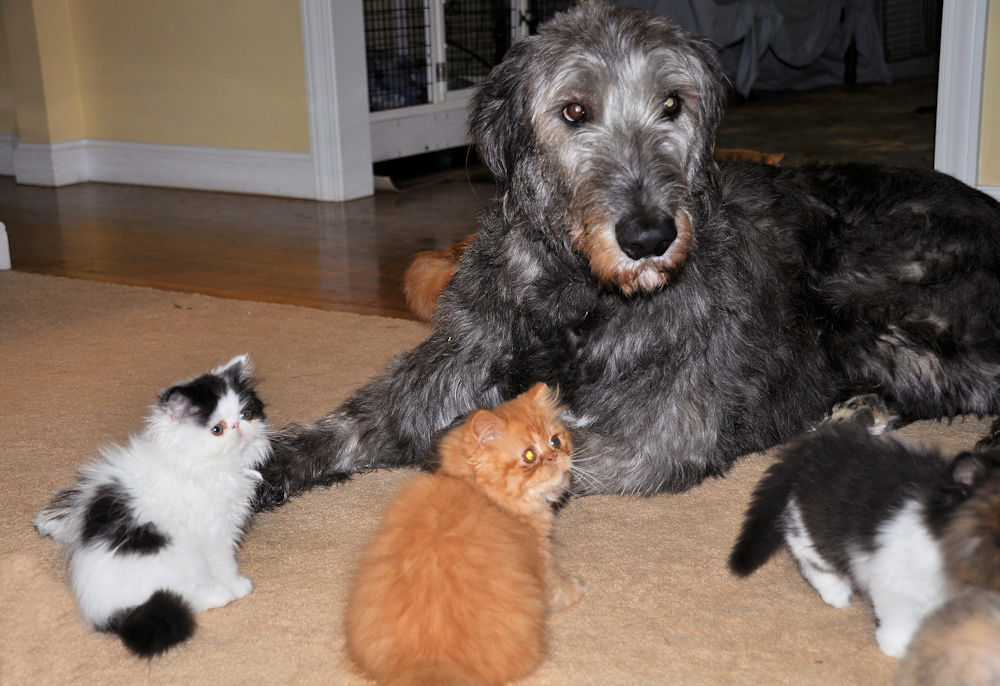 To our wonderful visitors:  We have never felt that the purpose of this site should be political. However, with all of the on-going animal legislation (and breed specific bans --- dogs), we felt it was high time that we publicly took a stand. It is time for all animal lovers who wish to continue to own and enjoy their chosen breeds (whether show or pet) to take a stand or you may lose the right to own your chosen animal or breed. Become educated. The Animal Rights Organizations are not just about animal rights or prevention of cruelty to animals. These organizations and their efforts will affect everyone ... not just show people or hobby breeders ... but pet owners also.

You have a voice... it is time to use it. Below is a wonderful article by Paul Root, Chairman of RALEEF, (reprinted with permission).

My Cat Votes... Does Yours?

Yes, my cat votes... but what about yours? It's high time they did or the possibility of no cat households may become a reality.

Over 40,000,000 American households own at least one dog. When you add cats into the equation over 50% of all Americans own a loveable furry fuzz ball. Furthermore... when you add all categories of pets into the equation, pet ownership approaches 70 percent of all Americans. That's a very impressive statistic and these same folks sponsor a "multi billion" dollar pet industry that provides more than $14 billion in food and billions more in veterinary care, toys, and other related products. One could also assume this would create a significant block of voters -- and it does. The rub of course, is that not all of those pet owners belong to the same party or share the same ideologies. The purpose of this article is to persuade you to come together to actively support your right to own a pet!

There are groups that are busily working to make the right to own any animal a memory. They are known as "Animal Rights Organizations". They are well financed and committed with thousands of like-minded activists promoting legislation and ordinances that will eventually lead to "no pet" households.

These organizations sound like kind and caring groups who only want what's best for "mans best friends". Humane Society of the United States (HSUS) is the largest. The word "Humane" by its very nature sounds great. People for the Ethical Treatment of Animals (PETA) is another Animal Rights Organization (ARO). Who wouldn't want their animals treated "ethically"? However, these two organizations do not support the "Animal Welfare" that their names would indicate, but instead are committed to the concept of "Animal Rights". There is a huge difference between the two! Both subscribe to the "Animal Rights Agenda" (ARA) listed below...

If you pay attention to Plank 10 of the ARA you will understand why it's important for anyone's dog, cat, ferret, goldfish, or parrot to vote. Now is the time for pet owners to cross party lines and come together in one unyielding group that will spoil the plans of the ARO's. It's "Good bye Fluffy" if we do not.

"It can never happen" you say! Au contraire ... and here's why. In the last 20 years the Animals Rights folks have incrementally chipped away at your right to own... let alone breed... a dog or a cat. They have influenced legislators from every State in the Union to introduce legislation that would curtail your rights to breed or own a pet. I have testified before such legislative committees and in one heated moment... a lobbyist for an ARO stood up and shouted... "Even one litter is too many!" and they mean it folks.

Animal Rights Organizations have influenced communities, cities, and a couple of States to adopt the "Guardian Issue." That takes any pet out of the property category and while they make it sound so innocent... there will come a day when a Judge will allow a pet "Guardian" to act in the "best" interest of your animal, no matter what you want to do. Innocent it is not.

Breed Specific Legislation (BSL) is also a hot topic and Pit Bull or Pit Bull like dogs are currently banned in many cities in the US and Canada. Now California has SB 861 that will allow any city to establish dangerous dog ordinances on any breed. That's a BIG incremental CHIP at your right to own a dog or cat.

Lately AROs are pursuing a new tactic -- Mandatory Spay and Neuter Laws... (MSN). MSN is a critical step towards their ultimate goal of completely eliminating pets. If all dogs and cats must be spayed or neutered they simply cannot reproduce... ergo success to Plank 10. Yes, current propositions allow for Service Dogs and Show Dogs to be exempt from MSN... but chip...chip...chip... they'll be back for them in a year or two.

Your political preference makes no difference on this issue, but your position on animal ownership does! Do you want to be able to own a pet or not? If you don't... continue to elect or do nothing to impede, the ARO backed candidates that would do away with pet's... period. ARO's have web sites with just such candidates listed to be worthy of your money and support. Why don't we? The simple answer is we're not as organized as they but that must change and change quickly.

That means you must support groups that are dedicated to spoiling the ARO's plans. Groups like the German Shepherd Dog Club of America's group Responsible Animal Legislation Educational Effort (RALEEF), the National Animal Interest Alliance or NAIA -- an excellent organization headed up by Patti Strand, and the American Kennel Club (AKC) are knee deep in fighting the ARO's. The newest and very effective group is the American Canine Foundation. The ACF was a party to the successful appeal and overturning of a BSL case in Ohio. (Tellings v Toledo Ohio) They have also filed suit against the CA SB 861 bill. I'm hoping for results similar to Ohio.

Contact any of these organizations at the following web sites: [these links will open in a new window]

You are the key! We need all animal lovers to come together to defeat those who would... and are... taking away your right to own a dog, cat, or any pet. Horse owners unite! ARO success would also eliminate horses from the planet; too. We must put politics aside and form a coalition that will insure big sloppy kisses or a purring cat rubbing up against you forever. This isn't a liberal or conservative issue. Liberals and Conservatives love their pets in the same ways. Each of you must become an advocate for your continued relationship with your pets and influence your friends to do the same. We must form coalitions of owners, Parent Clubs, and all those who want to have their right to own a pet guaranteed in the future.

NAIA has another site called the NAIA Trust. Find them at www.naiatrust.org. They have great information on how to make your votes count the most. It's time we take off the gloves and give back to the ARO's what they've given us over the past 20 years. We cannot remain complacent in this battle or we will surely lose. We must educate the uneducated and then use education to elevate standards in responsibility and care.

The ARO's would have you all believe theirs are the only solutions to their perceived crisis. There is no crisis! Statistics show that 7 of 10 owners of dogs and cats have them spayed or neutered. There are irresponsible pet owners though, and they are the ones we must reach. We can do that by teaching "Responsible Pet Ownership 101" at every educational level. By doing so, we could graduate class after class of responsible pet owners that will obey existing pet laws. We don't need more laws... we need more common sense. You cannot legislate responsibility... you must educate.

Get involved -- make your voice heard! Go online and contribute -- contact your local leaders- write letters to your Editors -- and encourage TV Reporters to explore the ARO's and their plans. We need to make ourselves heard above the din of ARO's demands. But whatever you do, VOTE! My cat votes and will do so with common sense. How about yours?