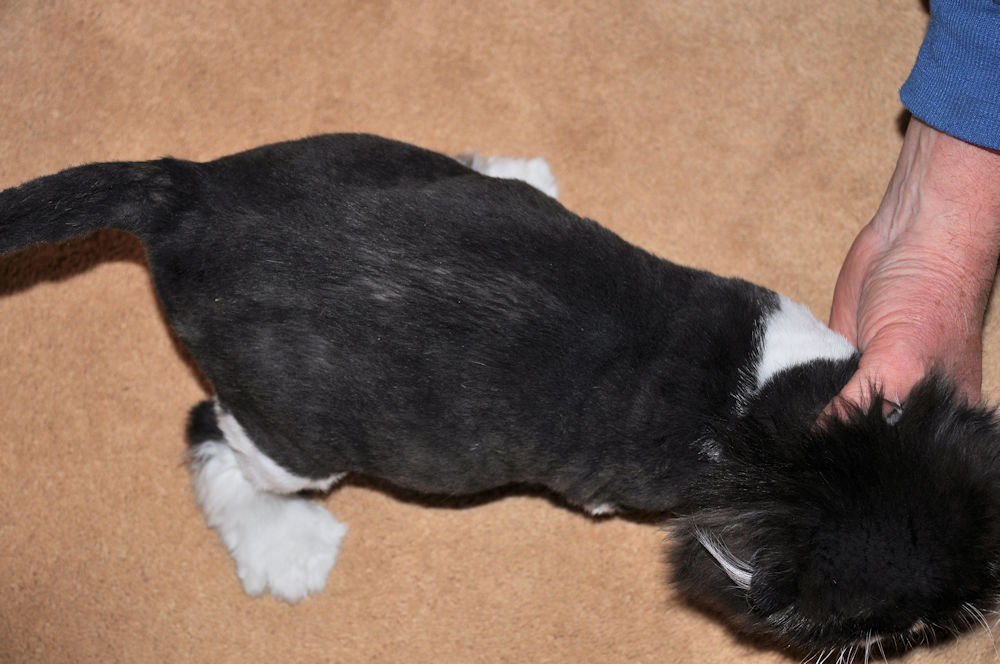 Millie, our black and white pregnant, female Persian cat, was expected to have her kittens on or about August 19, 2014. On August 18th, she started showing some signs of "nesting" behavior – digging in her birthing box, sitting down on her back haunches, and then unsuccessfully trying to lick her very pregnant belly and nether regions, which for a soccer ball with legs was pretty much unreachable. More often than not, Millie would just tip over to one side or the other because she was just so round on her bottom half. Pretty cute if you ask me.

On August 20th in the late afternoon, I was in my bedroom talking on the phone with one of my friends while keeping an eye on Millie, whose rolling and licking behavior continued without any digging behavior or interest in going to lay down in her birthing box. It was obviously the calm before the storm.

At about 6:00 p.m. (all times EST), Millie cried out which was a signal that she was no longer preparing for labor but was in active labor, and a kitten was coming NOW. I hung up the phone (actually, I did it kind of rudely…) and went to sit on the floor next to Millie's enclosure with the enclosure doors open, the towels, scissors, forceps, bulb syringe (to suck fluid out of the baby's mouth and nostrils) right next to me for quick access. On a table by the enclosure is a baby scale, a file folder for this litter already marked with "Millie and ESPY" (the mom and dad) and waiting for me to make notes during the birthing process. Also on this table are more towels, paper towels, zip lock baggies, disinfectant for the umbilical cords, disinfectant for the medical instruments and scissors, and a few medicines that used properly can sometimes save a newborn's life. Throughout the next hour, Millie was not actively straining and was not in distress, but about every 10 minutes, she would have 2-3 light – to moderate contractions, and then nothing for another 10 minutes or so. This continued until about 7:05 p.m. when I made the decision (based upon a digital exam of Millie) that a kitten needed to be born and quickly to try to avoid any losses and the need for an emergency C-section.

At 7:05 p.m., I gave Millie an injection of Oxytocin (a medication which assists with labor contractions).

At 7:25 pm., the first kitten was born. This kitten was a black and white (what used to be called a VAN, meaning it has few or no marks of color on the body other than white and has marks of a 2nd or 3rd color on head, feet, and tail.) This little male weighed in at 3.4 ounces!

Nothing, not even signs of little contractions, so I did another exam of Mille at close to 9:15 p.m. On finding that I could feel a kitten at the tip of my finger (and there was not enough room in there for me to get a hold of the baby to pull it out to birth it), I decided to give Millie a second injection of Oxytocin.

At 9:25 p.m., a blue and white male weighing 3.6 was born healthy and breathing – no problems – and I am very glad I made the decision to assist her contractions with the Oxytocin, or this particular kitten might not have made it. However, Millie retained the placenta for this particular baby. I made a notation on the records to make sure that when the next kitten was born that there were two placentas. A retained placenta can cause a life-threatening uterine infection.

I palpated Millie's stomach to see if I could feel more kittens, and I felt very strongly that there was another kitten still inside. I waited from the time the Blue and White boy had been born at 9:25 p.m. until just after midnight – no kitten or the missing placenta. I did another digital exam but did not feel a kitten. However, I could feel a kitten when palpating her tummy on the outside. Millie was no longer having contractions since the birth at 9:25, so by midnight, I decided that either: (1) I was mistaken, and there was no kitten inside which is why her labor stopped, or (2) there was a dead kitten inside which is again why her labor would have stopped. But in either scenario, that retained placenta had to pass. Therefore, I made myself comfortable and settled in for a long night of observation.

The use of Oxytocin in stimulating contractions can be dangerous as it can cause the uterus to be prolapse (expelled) and should always be used with caution and ONLY under the direction of a veterinarian. My veterinarian has recommended that I give no more than two injections during labor unless otherwise instructed by her. Since Millie had already had two injections of Oxytocin, I was very reluctant to give her another one, AND I was not sure that there was another kitten waiting to be born. This was a judgment call on my part.

At 12:40 a.m., two things happened: (1) the retained placenta was passed, and (2) the last kitten (along with its placenta) was born. However, despite my trying to save this baby, I was unable to. She was a lovely, lovely calico van. She only had a bit of red on the top of her head, down the front of her face, a bit of black on the other side of her face and her tail. She was a stunner and I was very sad to lose her.

A kitten has a finite time once it has detached from the uterine wall to be born or it will die due to Hypoxia (lack of oxygen). Kittens born after a difficult birthing (dystocia) may have a higher risk of death because of the lack of oxygen or the birth of a weak kitten that fails to nurse. There are studies that show that Persian cats experience more birthing problems, including stillborn kittens than other cat breeds.

Millie was finally able to settle down comfortably with her three kittens and was cleaning and nursing them after birthing the last kitten and passing the retained placenta. She is doing a great job!