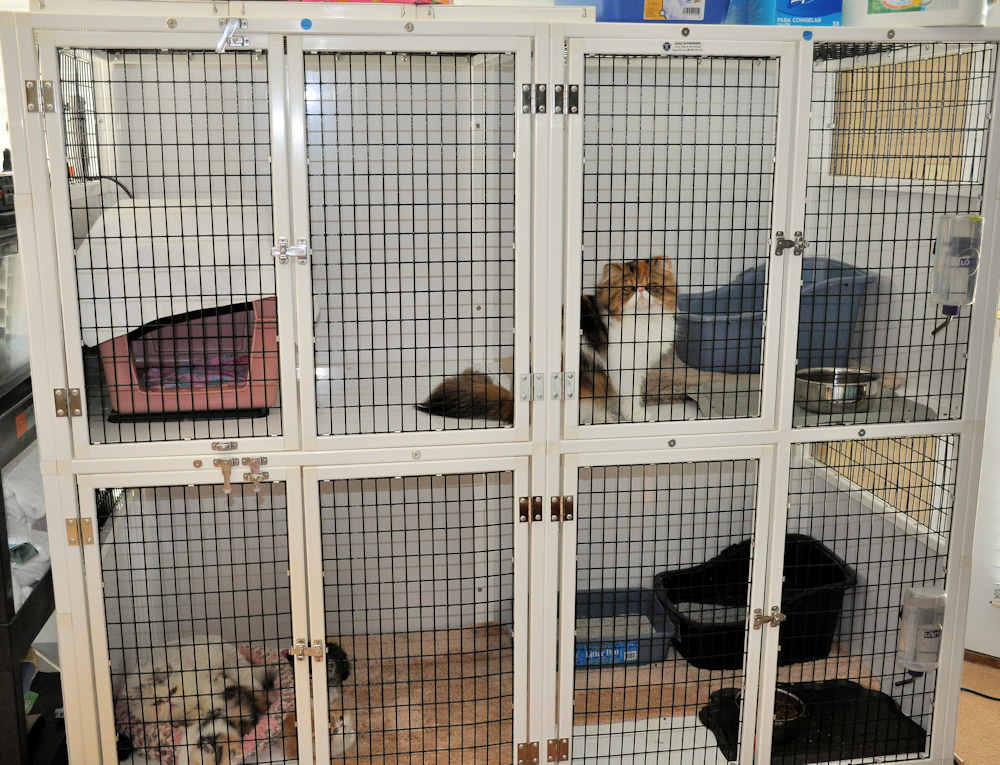 Many cat breeder websites boast about being a "cageless" or "cage-free" cattery – inferring that they allow ALL their cats to run free in their entire home. Those breeders say their kittens are "raised underfoot" in their home. An impressive statement, but is it accurate? The terms "cageless" or "cage free" are misleading, and I think, that breeder is irresponsible for the lives of the cats and kittens under their care. Nobody wants a cat living its entire life in a cage, and that is not what responsible breeders do. Responsible breeders are constantly moving cats from one enclosure to another, rearranging which cat lives with another one, and letting a few cats run the home.

With intact male cats running loose in the home with adult female cats, how can a breeder know who is the father of the kittens? Female cats can breed with more than one male cat resulting in a litter with multiple sires. In order to determine parentage, a buccal swab from each kitten in the litter needs to be taken, a buccal swab of all the possible candidates for father, and those swabs are then submitted to University of California Davis (UC Davis) for paternity testing; a costly $40 an animal. That adds up fast! Then there is the added cost of registering the kittens with multiple sires with the Cat Fanciers' Association (CFA).

Another reason for using enclosures for an intact male cat is because they can re-breed a female cat that comes into heat shortly after she has had her kittens (as early as eight weeks after giving birth to the previous litter)!!!

Enclosures come in all shapes, sizes and materials. Before buying an enclosure consider the following: the material it is made from, cleaning ease, how it will stand up to disinfecting (i.e., most breeders use a bleach solution), floor space, shelves, and wire spacing / material.

Why Pelaqita Persians Use Enclosures

Throughout the years, we have experienced some of the issues mentioned above. When we first started breeding and raising Persian cats, we let all the cats run the house. We did not have a male cat, so we didn't have to worry about marking or a surprise mating. However, we quickly learned that when keeping multiple intact female cats that when they came into season, they would fight with each other, and a few of them started spraying and/or marking to claim "their" territory in the home. This behavior damaged our carpets, our furniture, and our window coverings. Yuck!

After realizing that intact female cats do in fact mark and spray, we converted a spare bedroom into the "cat room" with enclosures. Cats that were in season were housed in enclosures in the cat room. Non-cycling cats were free to run the entire house (again, we did not have a male yet). This plan worked for a few years until we got our first intact male Persian cat which complicated things a bit. With an intact male cat, we could not allow him to run with all the female cats or we would not know: (1) who he had bred, or (2) when kittens were due. When a cat was due to have kittens, she would give birth in our bedroom. When the kittens were old enough to crawl out of the kennel carrier, we would move mother and kittens into the "cat room" for room to stretch their legs, play, and develop good litter box habits. However, it quickly became obvious that we were running into litter box issues. Since the kittens were running the cat room, they were using the carpet for litter boxes. It was obvious we needed to use enclosures for birthing cats and until they were old enough to "get" what the litter box was for.

We needed to find a safe way of containing the cats and kittens during different times of the year and for different reasons: breeding, pregnancy, illness, male cats, kittens, litter box training, a new cat, etc. We started talking with other breeders, looking at other breeders' websites and what they had to say (if anything) about the enclosures they were using, and researching the Internet; we came across CD&E Enterprises. CD&E make enclosures of all sizes, shapes, and for all different animals. We currently have five CD&E enclosures, are thoroughly satisfied with them and would not use any other enclosure for our precious Persian cats.

CD&E provided the descriptive text and is used with permission of CD&E Enterprises - (800) 528-2243. All rights reserved.