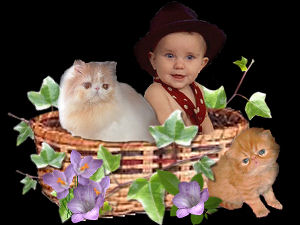 Additionally, there are environmental and nutritional factors that can tip the scales on an animal who is borderline for dysplasia (i.e., obesity is a huge factor). We know from the careful breeding of only those dogs without hip dysplasia produced fewer incidences of the disorder in their offspring.  However, it is a bit more complicated in cats.  The authorities and researchers are not sure of how it is “inherited” in cats, so their suggestion is not to breed a dysplastic cat.  I agree with that thought as far as breeding dysplastic cats.  However, just because a certain breeding pair without dysplasia that may have produced one kitten with hip dysplasia does not mean that breeding pair should be removed from a breeding program unless it happens more than once.

What is Hip Dysplasia?

Hip Dysplasia (after the Greek word for “malformation”) is the malformation of the ball-and-socket joint that connects the cat’s femur (thigh bone) to its hip (socket or cup).   In cases of dysplasia, the “ball” is the knobby top end (femoral head) of the thigh bone, and the “socket” is a cup-shaped cavity located at the lower end of the hip bone.  In normal hips, the femoral head, while fitting snugly within the “socket” freely glides and partially rotates to allow a cat to lie down, stand up, climb, chase, etc.

What do the Experts Say?

An article by Cornell University:

"A specific cause of feline hip dysplasia has not been identified, although the condition is widely thought to have a genetic component, since it seems to be more prevalent in certain breeds, such as Maine Coons. Other factors appear to play a causative role in the development of the disability; it is believed, for example, that obesity significantly increases the pressure on the hip’s supporting structures and may, therefore, contribute to excessive wear and tear on the joint. For now, however, veterinarians generally agree that the only way to prevent hip dysplasia would be to avoid the breeding of cats that are thought to be genetically predisposed to the condition."

Research has shown that hip dysplasia occurs more often in the Maine Coon breed; an estimated 20% are affected.

Colleen Power, in her article "Hip Dysplasia in Cats" in the June 1992 issue of Persian News, says,

"There is no single gene that is responsible for hip dysplasia.  Instead there is a gradual piling up of genetic factors... . The process is so dangerously gradual that, until the severe limp appears, the breeders' will have no idea that they have been gradually altering the skeleton and musculature with each generation."

How is Hip Dysplasia Diagnosed?

Hip Dysplasia is best diagnosed through radiography (x-rays) of the pelvic region, a procedure that requires the cat to be anethesthetized.  The Hip Dysplasia Registryt of the Orthopedic Foundation for Animals (OFFA) at the Unviersity of Missouri, assigns nine variations of congruity and fit between the femoral head (top of the thigh bone) and the acetabulum (hollow area in the pelvic bone into which the thigh bone fits):

Only cats with hips rated 1 through 3 should be used for breeding.

Most cats do not need any surgical intervention, although the addition of a joint supplement containing both glucosamine and chondroitin should be added to the cat’s diet.  In severe cases, surgery may be required.  Nowadays, most veterinarians no longer do an entire hip replacement.  Instead, they surgically remove the head of the femur – the ball part of the hip’s ball-and-socket joint-and do not replace it.  The muscles that normally hold those components will continue to do their job.  Typically, veterinarian’s call this type of surgery an FHO. 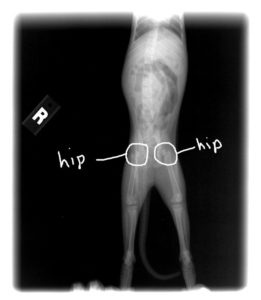 x-ray of Faith's kitten with the malformed hip joints

The summer of 2018, Faith and Mikey had a litter of six female kittens.  At about ten weeks of age, I noticed that one of the girls was limping on her right hind leg.  I figured she had pulled something playing and I kept an eye on her for the next few days to see if it would improve.  It did not improve, so I took her to the veterinarian.  X-rays were taken, and the results were that the kitten had hip dysplasia.  We have found an excellent home for this special kitten with a former client who is also a working vet technician.