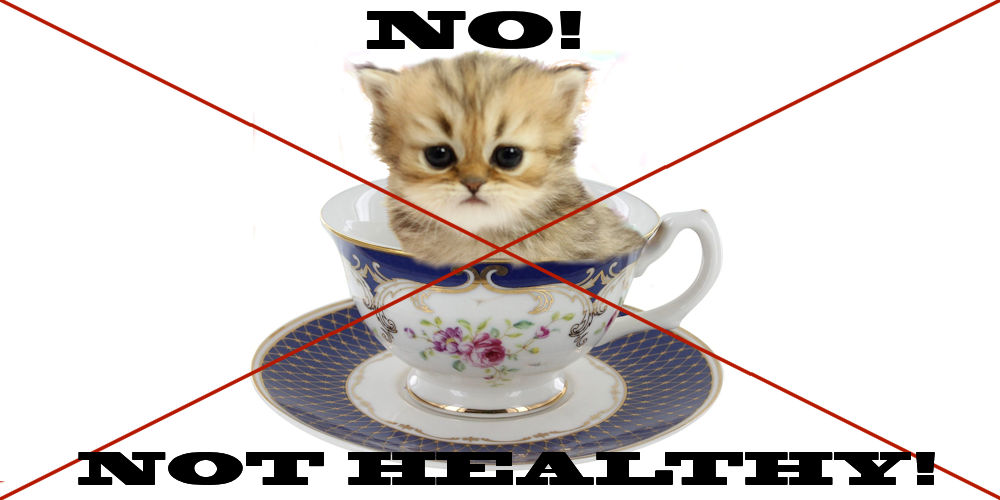 First, it is important to understand what the breed standard is for a Persian cat before we talk about what a "toy" or "teacup" or "Munchkin" Persian is. According to the Cat Fanciers' Association Persian Breed Standard "the ideal Persian should present an impression of a heavily boned ... and ... of cobby type, low on the legs, broad and deep through the chest, equally massive across the shoulders and rump, with a well-rounded mid-section and level back. Good muscle tone with no evidence of obesity. Large or medium in size."

Translation = The Persian cat is not a toy breed, but a medium to large, sturdy-short, compact cat. That being said, it is not a largest cat either (i.e., Maine Coon). Persian cats at adulthood will weigh somewhere between 7 - 13 pounds, depending on whether it is a female or male cat. However, Silvers and Goldens have always been smaller than other colors of Persians. An average silver or golden Persian female weighs 5-6 pounds. An average silver or golden Persian male weighs 7-9 pounds. Good breeders (those who show and are trying to improve the breed) are working to breed away from this small size as a Persian should be a medium to large cat as defined by the Cat Fanciers' Association Persian breed standard. To review the full Cat Fanciers' Association Persian Breed Standard in its entirety. (Adobe Reader is required to view the file).

When I spoke to my veterinarian about what made a "toy" Persian, I was told that it was a "genetic anomaly" or what used to be referred to as the "runt" of the litter. However, in recent years a few (so-called) "breeders" have selectively bred for this "trait" to produce the "toy" or "teacup" Persian. Furthermore, for every "genetic anomaly" that you see (like the dwarfism gene) there are other potentially harmful genetic anomalies that are not seen. In other words, it is WRONG to selectively breed for this particular gene.

The goal of any responsible breeder is to breed to the CFA Persian Breed Standard.  Otherwise, in my opinion, they are a "for-profit" business and are not focusing on improving the breed. Hobby breeders at breeding as a "hobby" and they breed for the improvement of their chosen breed.

WARNING: THERE IS NO SUCH THING AS A TOY PERSIAN, A TEACUP PERSIAN OR MUNCHKIN PERSIAN!

There have been quite a few websites where silver and golden Persians are popping up recently that claim to have toy or teacup size Persians for extraordinary prices for pet quality cats with inferior bloodlines ($2000-$4000+!). Silvers and Goldens have always been smaller than other colors of Persians. An average silver or golden Persian female weighs 5-6 pounds. An average silver or golden Persian male weighs 7-9 pounds. Reputable breeders (those who show and are trying to improve the breed) are working to breed away from this small size as a Persian should be a medium to large cat. However, some breeders are misleading unsuspecting pet owners into thinking this trait is rare, coveted, or new, and charging exorbitant amounts of money for their kittens. This is very wrong and it hurts the breeders who are honest about their kittens. This is not a business nor is it a hobby that someone can get rich from. Please if you think that raising beautiful Persians is a great retirement plan, DO NOT contact me. I am only interested in placing my Persians into a wonderful, loving pet home or with a serious, responsible and honest breeder.

"Warning" is courtesy of Gail Persinger of Kittikamir Persians and used with permission. Thank you Gail!