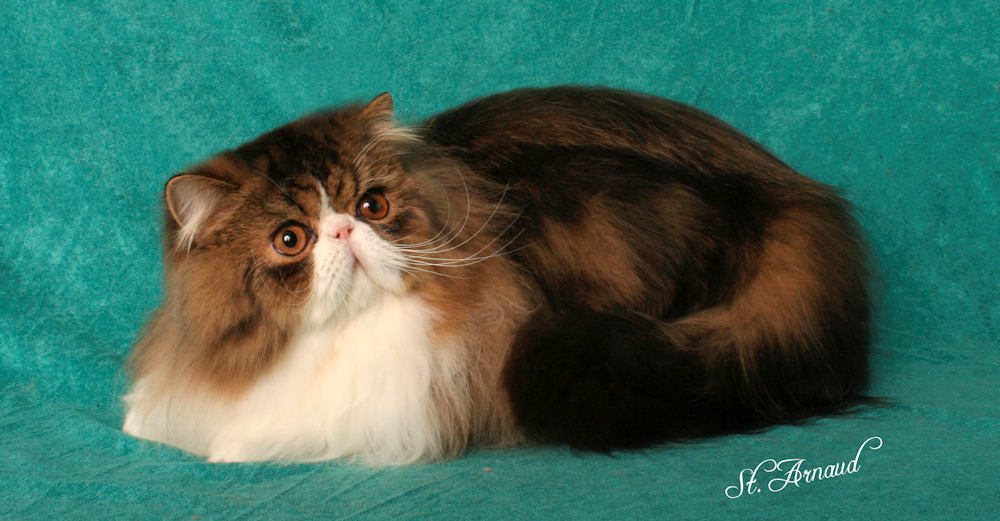 Over a year ago, I placed an intact breeding pair of kittens with a woman living in the western part of Illinois. She had said that she had bred and showed Persians cats in the 1970's and wanted to get back into cats. She was looking for a solid cream kitten.

About two or three months ago, she contacted me about breeding the female I sold her to my Grand Champion male, Diggie. Since I do mentor newbies (or in her case, someone returning to the cat fancy), I readily agreed. More often than not if a female is sent to the home of the stud cat, she is so frightened that she will stop her heat cycle. I made the decision to let Diggie go to her house. Before Diggie left our home, I clipped him down into a lion-cut, bathed him, and cut his nails. I told her I needed Diggie back by the end of June no matter if he and her cat had bred or not.

She drove down from Illinois to our home here in Central Ohio to pick up Diggie. Her female was currently in heat, and we were not sure that she still would be by the time she got back to her home in Illinois. As it happened, the cat was no longer in heat and showed no interest in Diggie.

The lady and I talked several times over the next month waiting for her cat to come back into heat. Finally, as the end of June neared, her cat came back into heat. I asked her if they had bred and she said she did not know. (That should have been my first warning signal.) We made arrangements for her to drop him off at my home on the Friday before the Great Lakes Regional Show, which occurred the weekend of June 25, 2016.

On Friday, I washed the two cats I was taking to the regional show and left for the hotel in Akron I would be staying at. That night my husband called me to let me know Diggie had been dropped off. I asked him how Diggie was, and he told me that he looked "rough." I knew the lady was scared of Diggie, so I figured she had not bathed him which was not a problem for me. What I did not know…..

On Sunday night when I got home from the show, I got a chance to see Diggie for myself. I was appalled at his condition and got angry. My husband had not wanted to upset me during the show weekend, so he minimized how bad Diggie was. My husband washed Diggie to the best of his ability by himself.

This is what I found when checking Diggie out more closely:

1.   Severely matted, including a mat on and around his testicles;

2.   Covered in feces (and this was AFTER he had received a bath – John did the best he could by himself);

3.   The white fur on his legs was stained a dirty yellow color (meaning Diggie had been standing in waste);

4.   His face was filthy, and his ears had a black discharge in them;

5.   His nails were so long they were starting to curl up into the pads of his feet; and

6.   Diggie was cowering in his stud enclosure as if afraid of us!

I immediately called the lady that I had loaned Diggie to. I was very angry (unfortunately, my Sicilian and Portuguese side came out), and she attempted to make excuses for why she would return my Grand Champion stud cat to me in such poor condition. I told her I did not want to hear it and promptly hung up on her. Over the next two days, despite my husband and myself telling her not to call me anymore, she called numerous times.

On Monday, I took Diggie into my vet for an exam. My vet was also appalled at the condition of Diggie. She said that he was fine overall, other than being severally neglected, and he had a very bad yeast infection in his ears.

What is interesting is the lady gave me a receipt/record from her vet dated June 22nd which indicated that she had asked her vet to make sure Diggie did not have ear mites, and the test confirmed a negative finding. I could not understand a vet not making any record of the condition of the cat on his record, so I called the vet to find out what was going on. I was told that the record I had been given by this woman was "incomplete" and she faxed the complete record to me. On that record, it clearly outlined the neglected state of my beloved cat. Therefore, it was obvious to me that the woman I had loaned Diggie to, had intentionally tried to mislead me. Furthermore, the vet told me that the woman had ONLY wanted Diggie examined for ear mites and nothing else!

On Wednesday, I finally called back the lady who had so severely neglected my cat. She once again tried to "explain", but I promptly cut her off. I told her I did not want to hear her excuses and that she was going to listen to me for once. I then reiterated all that was wrong with Diggie and that I no longer wanted to associate with her in any way, including any interaction at cat shows. I terminated the mentoring relationship with her.

At first, my knee-jerk reaction was to say "I am not going to ever, ever help anyone again" and "why do I attract the crazies"? However, that is really not what being a good breeder is about. As reputable breeders, we have to mentor those with less knowledge for our beloved breed in order for our breed to continue long after we are gone. I called my mentor who suggested a re-thinking of my criteria for loaning out my cats to someone. I now have adopted a new policy for this, and I believe in the future, this new policy will protect my cats from ever undergoing such bad treatment again.

Diggie is recovering; every day he comes further out of his shell, and his ear infection is being treated. My hope is that the horrible treatment he received at the hands of this woman will not prohibit him from every breeding one of my cats in the future.

Update: Diggie made a full recovery, including getting back to his loving temperament.  He has also sired several litters since the time I loaned him to that lady.